Long-time Montana actor and musician John Hosking recently told me a story about another actor he worked with over 25 years ago. This friend left acting for a while, frustrated with the hard scrabble life and not feeling he’d made much of an impact. In the nineties, he spent some time volunteering with a medical aid organization in Bosnia. Most of the towns where they set up clinics were full of rubble and utterly quiet. Not a soul in the streets when the convoy rolled in. There were still people there; they just never left their homes out of fear for their lives.

In one such town, one evening John’s friend witnessed something nothing short of miraculous.

Perhaps because of the scrap of hope and stability brought in by the mobile clinic, a handful of musicians gathered in the square and set up a few chairs and an impromptu stage area. The musicians took turns singing and playing instruments that had survived bombing and burning.

“My friend told me how he’d never seen any of these people smile before,” John said. “For the first time, he saw them smile. While there was music, they were alive. He saw that was the power of art.” The man eventually returned to the States and got back into acting and directing in small regional theatres. He realized his work mattered.

John co-founded the Vigilante Theatre Company with Rhonda Smith in 1981 and they brought live theatre to small towns throughout the Northern Rockies for over 30 years. They performed in bustling university cities and remote agricultural towns. They ran shows written by regional playwrights. Many of the scripts were comedic. Some a bit more avant-garde. All had heart and several reflective living questions woven in.

At the most rural venues, a Vigilante show was often the only live theatre the audience members experienced each year. Skeleton-budget rural arts councils called the Vigilantes back year after year for decades. So did well-funded urban community groups.

Astounding the power of art to connect equally with such diverse audiences.

I met John in 2008 as he was transitioning away from touring theatre and spending more time alone, writing his own music. He wrote story songs and love songs, character songs and life philosophy songs. Thoughtful. Soothing. Sometimes comedic too. Always a reflective question woven in.

Once again, John is sharing his art, and that art brings people together.

Last weekend I experienced something certainly not so earth-shattering as that impromptu concert in a war-weary town, but heartening nonetheless. John’s house concert, in the home of photographer Lissa Barber, brought together a few dozen people from all over the Gallatin Valley and Helena. The guest list was, in terms of religious and political affiliation, broad.

I knew the crowd ran the gamut: vocal Republican, activist Democrat, Libertarian, Green; Atheist, Christian, Jewish, Buddhist, Agnostic. I knew this, and I knew this for over a week as I reviewed the reservation list. Never once was I concerned.

Here is what I trusted would happen, the reality of what did happen.

We all gathered in the same room for an evening. We all listened to songs about life and love and longing for peace. At several points that whole crowd hummed with recognition, all resonated simultaneously, “Oh, yeah, I know that feeling.”

That’s the power of art. It reminds us who we are, gives us names for things, humbles us and confronts us with our common humanity.

Yes, this is all working up to a promotional bit. But only in part, I promise. Grant me 144 words and the grace to hear me out.

Yes, I hope you give to John’s Kickstarter campaign to support his first studio album. Maybe you’re not into folk music. That’s fine. Don’t give to get a copy of the album. Click on the option to give five dollars with no reward.

Support John, or any other artist, solely as personal declaration that we are still a civil society. We are still able to gather together and share wine and cheese and good music and appreciate fine art for an evening.

Maybe don’t give to John’s Kickstarter. Maybe give to a different artistic cause. Whatever the cause, make your choice an act of defiance against fear itself. Because once we decide life is too awful to support and enjoy and be nourished by art anymore, well, we really have given up at that point. Listen. We’re not at that point. 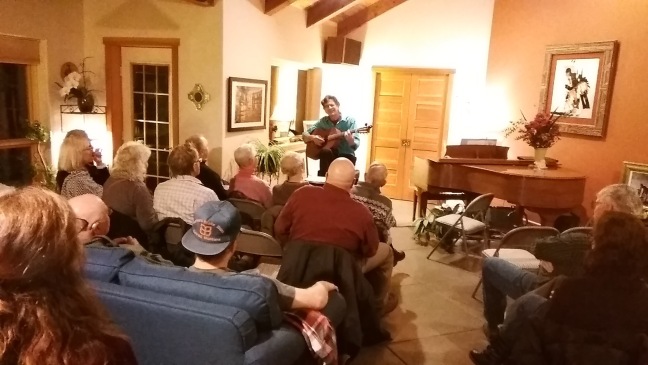 Discover regional authors.  See inside new titles, and schedule an author as your next guest speaker. (Read more.)